Ive always fancied getting myself a Vostok Scuba Dude, but for some reason or another I just never got round to actually buying one. I’ve lost count of how any times I’ve seen one on Instagram or on a watch forum and posted something along the lines of “Love these, must get myself one soon”, but I never actually did anything about it. I’ve had a few Russian watches before, some pieces from Poljot and a Komandirskie or two but the Scuba Dude just didn’t seem to happen.

After seeing a particularly nice Scuba Dude on Instagram I decided I should just bite the bullet and get myself one, after all, if it it arrived and I didn’t like it I could move it on again without too much hassle as they have quite a strong fan base. Also, to be honest, I thought I should get one as I felt like like a bit of a fraud after featuring a Scuba Dude in my last blog as being a great affordable watch  even though I’ve never owned one!

After posting a few unfruitful wanted to buy posts in my usual watch forums, someone pointed me in the direction of meranom.com where I duly decided on the version I wanted and placed my order. The watch came to a total of just over £50, this amount of money doesn’t really get you much these days. Almost a tank of fuel? A take away and some beers or a couple of bottles of wine to wash it down with? It certainly doesn’t seem enough to get you a 200m rated dive watch, with in House automatic movement and screw down crown, shipped to my door from Russia. My expectations weren’t very high, but non the less I was quite excited to be finally getting my hands on one, and the next three weeks felt more like months.

After spending quite a while stuck at Russian customs the postman eventually delivered my package which looked like this:

The plastic box looks like it’s straight out of the 70s!

The first thing I did when I opened the box was to remove the stock bracelet, I had heard that they weren’t very good, which turned out to be an understatement! I didn’t even bother to get a photo of it, it also had an odd smell, it reminded me of a metal workshop, the cooling liquid that gets poured on the metal in the lathe sort of smell. Nato strap now fitted (which was almost a problem as the watch has 18mm lugs and my strap collection is all 20mm and above, I was sure when I ordered it stated 20mm, I ended up pinching one of my 8 year old sons natos) I unscrewed the crown to set the time. The wobbly crown was also something I had read about being a ‘feature’ of this watch, protects the crown stem from damage if it gets knocked apparently, what I hadn’t read anywhere though is that the crown itself resembles, and feels the same quality as a beer bottle cap, just a bit smaller. With the crown unscrewed it took me a lot of turns to get the date wheel where I wanted it, ir would appear that there’s no quick set date function here, or if there is then it isn’t working. Pushing the crown back in to the point where the crown stem is engaged takes a bit of fiddling and part screwing and then unscrewing the crown again. Eventually it will engage and allow you to screw down the crown fully. 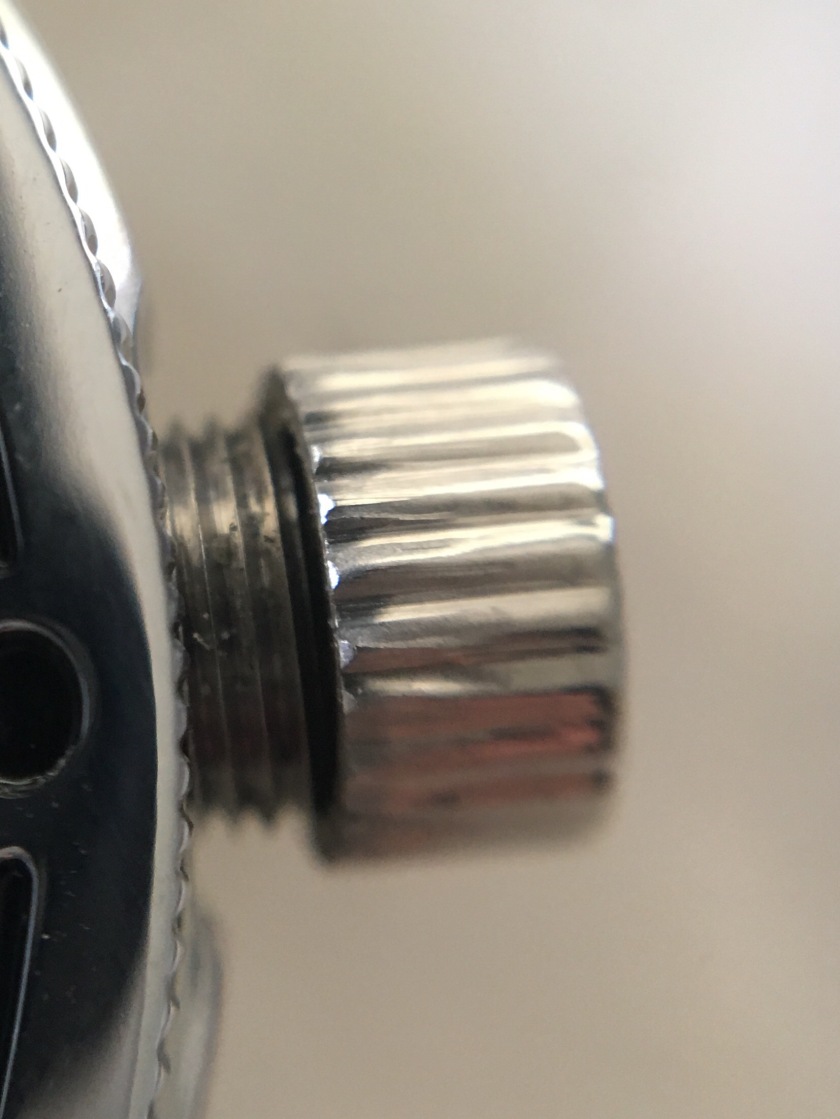 Moving onto the bezel, I’m not really sure exactly what purpose this actually serves, there are no numbers on the bezel to easily read elapsed minutes, just some black painted dots spaced out at 5/10 etc up to 35 minutes, and red dots from 40 to 55, and a slightly larger red dot at 12. The bezel doesn’t click like most of my dive watches do either, it just turns (roughly I must add) bidirectionaly.

Leaving the above points aside, this watch is just a really cool thing, the little Scuba Dude on the dial brings a smile to face every time I look at him, in fact when I’m checking the time I tend to give Scuba Dude a glance first, just to make sure he’s ok!

The dial is a lovely hue of green which sort of reminds me of the ocean, a nice touch on a dive watch. The domed crystal is a joy to look through to see the sword shaped minutes hand and the arrow tipped hours hand. These are lume filled, as is the lolly pop on the red seconds hand. The lume, whilst not very long lasting, is decent enough.

This watch on a nato is just so wearable, at 39mm diameter and with 18mm lugs it’s so comfortable and fits nicely on my wrist. The time keeping after a 2 days is working out at around +30s per day, as a new watch this may well get better as the watch beds in, but I wouldn’t be at all bothered if it didn’t, I’m not going to lose any sleep at this rate for a watch in this price bracket.

I’m going on holiday very soon and I usually end up taking 2 watches with me, one for knocking around in and wearing in the pool, and another that’s more suitable for wearing in the evening when out for dinner, but do you know what? The Scuba Dude is more than capable and suitable for both of these roles. 200m of water resistance is more than apt, even for the deep end of the swimming pool, and I am actually really looking forward forward to wearing this out for dinner in the evenings.

So for £50, which is less than dinner is going to cost to feed my family of 5 on our holiday, I’ve got a really cool, really fun, versatile watch which may have flaws as I have pointed out, but flaws that add to the character and personality of the thing.

If you are sitting on the fence about getting a Scuba Dude then it’s time to jump off and get one, I’m glad I finally did, and it won’t be long until I get another!

One thought on “The best worst watch I’ve ever purchased!”